For as long as I can remember, fishing has been a part of my life. One of my first memories after we moved to BC is going sport fishing with my Dad and an Uncle in Saanich Inlet near Victoria. 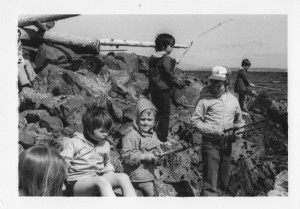 Us kids would also fish for bullheads during our summer holidays at Baba’s Beach, near Campbell River, BC.

When I was 9 or 10 years old, my father quit his job as the Production Manager at a local print firm (something that he had done for 21 years, starting after the death of his father) and took on whatever job he could to put food on the table. I have always loved him for his courage to take back control of his life and completely change directions. It has given us children that same courage and faith to make tough decisions to better our lives. One of the things that he did one summer, was to deckhand on his brother-in-law’s salmon troller. He caught the bug and soon bought his own troller. A 32′ fibreglass boat named Susie IV. On my 12th birthday, I joined him for what would the first of many, many summers on the water. 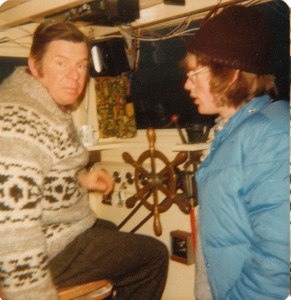 The boat was large enough that we could fill the hold full of ice and stay out for a week or so, depending on what we were fishing for (some species keep better on ice than others) and how successful we were. I say we, but it was all Dad. He had a knack. He could think like a fish. When his fishing buddies would be coming up empty, he’d be on the fish.

During the last few weeks of the season I’d go back at school ( Junior High, High School, then College) and he’d hang on to the last trip to bring home to a) sell to family and friends and b) fill up the freezer and canner with fish. We always had fish and while some folks (Mom) got sick of so much salmon, I could never (and still can’t) get enough. 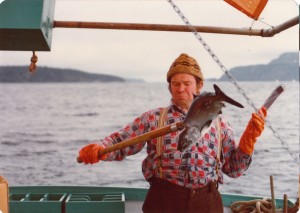 Fishing is indirectly how I got my current (and best) job. After I graduated from college, I went fishing for the summer and through to the end of the season. I made enough money (and enough fish in my own freezer, now shared with Moe), that I wasn’t in a huge hurry to find a job like the rest of my class. When I applied for job “with 15 years experience in the marine sector” at a small Oceanographic Consulting company, the General Manager expected some crusty old 40 year old sea-dog instead of a fresh faced 20 something year old with that “pick me, pick me” attitude. One of the qualifications for the job was that I had been unemployed for 26 of the last 52 weeks…honest, I was looking. I started  in January ’86 and for many summers after that, I would still take a stint on the boat as part of my holidays.

He was fast, but not 3 a minute fast

In fact, most of the family would at one time or another, be Capt C’s deckie. My older sister Rose Anne went for a few years, my little sister Heather took a turn, Mom would go if the end of the season and the salmon run brought him to the relatively protected waters of Georgia Strait. She would be sick as soon as the boat pushed off from the dock, but she was a trooper. Moe even took a turn when I was in college. That was a scandal… “Have you heard? Clarence has some chickie as a deckhand?!?!” The background snickering stopped after they found out she was almost family and they all saw how well he was eating. While they were eating beans out of a can, Dad was eating roasts and things that they didn’t eat when they were at home!

Over time, with special thanks (not) to DFO, the fishing seasons got shorter and Dad spend more and more time at the Coast Guard as a fabricator in the Blacksmith’s Shop. During the last years that he still had his commercial license, he and I would take our holidays to fill the boat (and our freezers) with sockeye. 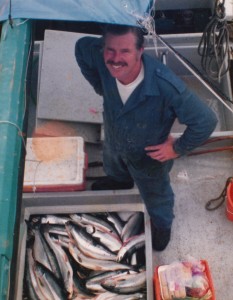 Somewhere in one of those last summers, long before Safeway started selling cedar planks, I gaffed a big block of cedar as it drifted past and the idea for Mark’s Famous planked Sockeye was born. I can still remember standing in the kitchen, filleting salmon while my two kids stood, mouths open like baby seagulls as I fed them bits of raw salmon. I think that’s why they’re so smart. 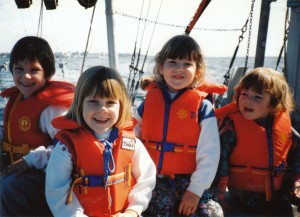 But the coolest thing I have ever done with fish didn’t involve catching or eating them.  3 years ago, in the fall, Dad and I went snorkeling with the salmon as they returned to their spawning grounds in the Campbell River. We were released upstream and drifted for 30 or 40 minutes downstream as the chum and spring salmon passed underneath us. It was a truly fabulous experience that I will never forget. 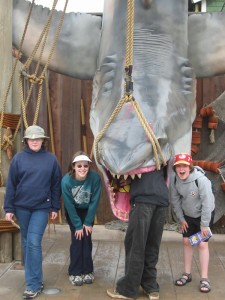 Some days, you're the bait

This entry was posted in By Sea, Family. Bookmark the permalink.