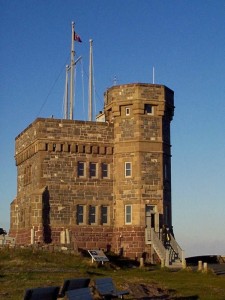 I’ve been to St. John’s Newfoundland and Labrador 4 or 5 times over the years…usually on the way to somewhere else. Once I went there only to watch helplessly as all of our gear was quickly removed from the ship before it departed for a Search and Rescue (SAR) call offshore. 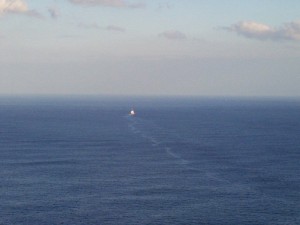 Without a doubt, the most exciting trip out to the Rock was in 1997 when we went out to deploy a couple buoys near the Hibernia Platform as well install some receiving equipment on it. 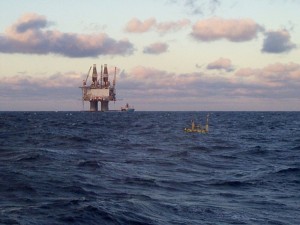 After the buoys were put into the water, Jim and I used one of the Coast Guard Zodiacs to transfer to one of the two supply vessels that are always standing by the rig. They are there to ensure that vessels do not stray into it’s exclusion zone. 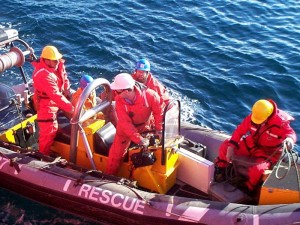 As Hibernia operates in an area where icebergs are common, the structure was designed to withstand a collision with a one million tonne iceberg without any damage. It is also designed to withstand contact with a six million tonne iceberg, which will happen only once every 10,000 years, with repairable damage. If a sizable iceberg is spotted by patron aircraft or satellite imaging, these support vessels can also be used to lasso the iceberg when it is still 20km away and change the berg’s trajectory. 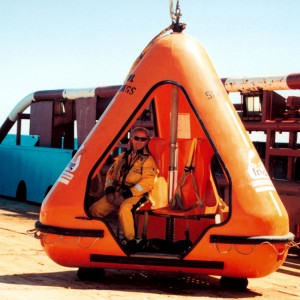 Accessing the Hibernia from the ocean surface requires a unique form of transport called a Frog (named for it’s ability to bounce on landing). Jim and I waited on the supply vessel while the Frog was lowered from the platform. Riding it down to meet us was our escort for the two hours that we would be onboard the rig. Since we had had a very abbreviated safety course for our short stay, we stuck to him like glue as he was our ticket off in the event that something suddenly went sideways. The platform was not yet producing, so the risk was fairly low, but the still very real.

I sat on the same side of the Frog as our escort and Jim sat on the other side, alone. The wind was a little gusty as we were being hoisted up by the platform’s huge crane, and the frog started to spin. I’m not a huge fan of heights, so this was little unnerving. Jim later confessed that he had stuck his leg out to “catch some air” to get a better view. 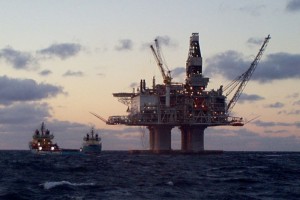 I think he still owes me a beer.

For those keeping track…there is now a brewpub (Yellow Belly Brewery) in St. John’s.

This entry was posted in By Land, By Sea, CAMRA. Bookmark the permalink.