So we’ve just about come to the end of this A-Z blogging challenge. For my final post in this series, I’ve decided to revisit one of my earlier posts with an update. 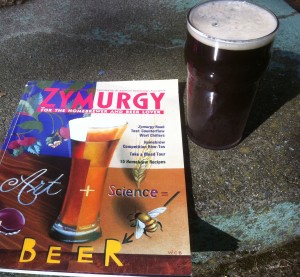 Back on April 2nd, I started my third batch of ale since restarting my home brew shop. One of the things that I love about brewing is how I can make small variations to my favourite recipes to change the flavour, appearance or effect of the beer.

The recipe that I usually use for my India Pale Ale (IPA) calls for 1 pound of Crystal Malt. If you were to taste Crystal malt, you would swear that you were eating Shreddies. Crystal Malt adds some colour, sweetness and body to a recipe. Since I only had 3/4 of a pound in my inventory, I topped off the grain bill with 1/4 pound of chocolate malt. This small change reduced the sweetness of the beer and gave it a darker hue.

Normally, after 1 – 2 weeks in the fermenter, I will rack (move) the beer to a secondary fermenter and add  1 or 2 ounces of finishing hops to add a nice hop aroma. When I checked the beer after 2 weeks, it had not progressed as quickly as I had hoped and I left it for another week. After the third week, I was ready to rack and dry hop the beer. As I was slated to head out of town for two weeks, this would ensure that when I got home, I would be ready to transfer my beer to a keg, put it in my magic fridge and would soon be enjoying real fresh ale.

As with so many things in life, plans change, ships get delayed and you adapt. I saw an opportunity to come full circle (almost); from Brewing to Zymurgy. Dry hopping relies on the hops sitting in the beer for a week or more and I didn’t have that time. One way to accelerate this process is to make a hop tea with the hops and add that at packaging. So I transfered from the primary directly to the keg, added my (wonderful smelling) hop tea and connected the CO2 system.

This change in procedure has reduced the hop aroma profile by about 50% over my previous batches. These two small changes have effectively converted my IPA into an Extra Special Bitter (ESB), and that’s ok with me.

I am hoping that small changes to a recipe can also change the effect that a beer can have on me. Before this batch, I made a ginger beer with 3 pounds of honey. After a night when I had “several” pints, I awoke to find that my tongue was swollen. I am hoping that a change to some Greek or other Mediterranean honey which is not made from the same grasses and pollens that I am allergic to, will have a lesser effect.

And with that, I raise my glass to you, feeling proud of my accomplishment with this beer and this month of blogging.

This entry was posted in CAMRA. Bookmark the permalink.