After my long ramble yesterday, I propose a shorter post today with movies. Go get the popcorn.

In late 2007, I was sent to Poti, in the Republic of Georgia to assemble and deploy a small buoy in support. Yes, it’s the Port of Poti…stop giggling.

My colleague and I were met in Tbilisi by our driver who pretty much stuck with us like glue for the week that we were there. It was an early Sunday morning and on the small country roads leading out to Poti, there were farmers on the side of the road, taking their produce and livestock to the market. I even saw a pig in a wheelbarrow. Really. Although neither of us could speak the other’s language, he was a wonderful host and took us into his home meet his wife, new daughter and mother.

Smoothest I've ever had

The mother was a small woman, wore black and the only time that I saw her was when we were first introduced, then after she returned from a trip to the basement with a glass vessel of her own Chacha which was the smoothest liquor that I have ever tasted. We ate it with a staple in Georgia…Cheese Bread. It seemed to be served at every meal. 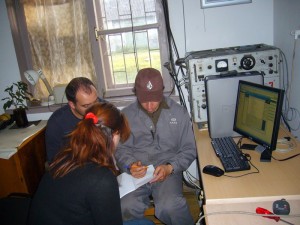 Our training was a challenge for a couple of reasons. Technology had not caught up to Georgia. The Institute where we were working had dialup internet, there was one internet cafe in the town and as land is used to its fullest potential, there were cows in the yard around the building when I was trying to install a receiver antenna.  The computer that we had supplied was the newest one that been in the building for 4 years and the contrast between the equipment that they were using and the tools that we have at our office was astounding. 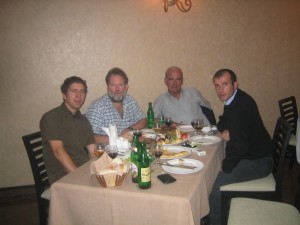 We can't eat sturgeon in Canada

One evening we were taken out to dinner by the head of the institute. We had fine Georgian Wine, more Chacha, caviar and fresh fish. When I was informed that it was sturgeon, I pointed out that sturgeon was endangered in Canada; that we were not allowed to keep or eat it. They said that, yes, it was the endangered there too. Hmm. Different rules, I guess. 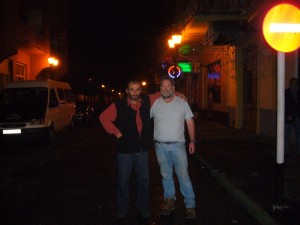 Looking for something to drink

Another evening, we rode along while our driver made a delivery to Batumi, another sea port, a few hours away. When we got to the dock, a group collected and we went in search of something to drink. The corner store sold Chacha and individual plastic cups for just such an occasion. A table was setup and we drank and toasted each other had a wonderful time. 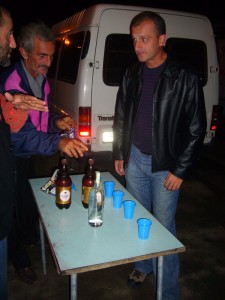 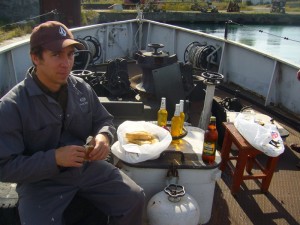 The morning after the night before. Just bread, please.

Below is a video that I put together after I got back. I hope that you like it. Below that is news footage of the same area taken about 10 months later.

This entry was posted in By Land, By Sea, Family. Bookmark the permalink.